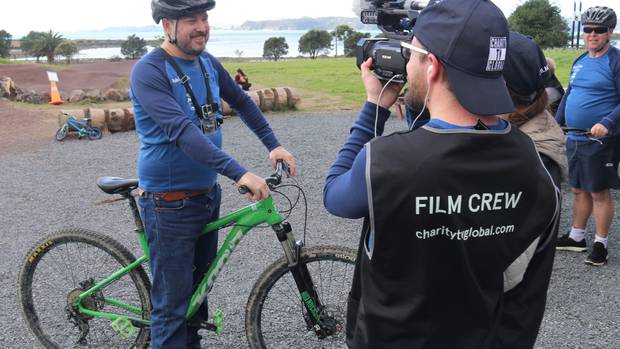 A new TV series being filmed in Northland all this week aims to raise money and awareness for a charity granting wishes to sick children — while also shining a spotlight on some of the region’s top adventures.

Filming for the first episode of Adventure All Stars is due to wrap up today after four days of filming at locations from Cape Reinga to the Kaipara.

The six ”ambassadors” starring in the hour-long episode have all fundraised for Make-A-Wish New Zealand.

The foundation grants the wishes of children with critical illnesses, which can vary from something as simple as an iPad to meeting a sporting legend or constructing a bedroom entirely out of Lego.

The ambassadors started their Northland experience with a powhiri at Waitangi Treaty Grounds. Since then they have been clay pigeon shooting on Karikari Peninsula, exploring Ninety Mile Beach, duneboarding at Te Paki, parasailing at Paihia and, after a brief training session on the pump track, riding in Waitangi Mountain Bike Park.

On Wednesday evening they boarded The Rock, an overnight cruise with opportunities for fishing, snorkelling and kayaking, while on Thursday they took a cruise to Motukōkako/Hole in the Rock.

Today’s activities are still under wraps — the participants have no idea what they’ll be doing until they arrive — but will involve adventures in the Hokianga and Kaipara.

Make-A-Wish chief executive Pam Elgar said everyone involved had been humbled and overwhelmed by the way they had been received by Northlanders.

”The entire region has embraced us and provided everything free of charge. We see this TV show as an incredible way to highlight what Make-A-Wish does in fulfilling the one true wish of a child with a critical illness. None of it would have been possible without the incredible generosity of this community,” Elgar said.

Two of the ambassadors in the show are parents of Make-A-Wish kids.

James’ wish after a bone marrow transplant was to have an iPad so he could pass the time when he was forced to spend three months in isolation.

Young Northlanders who have had their wishes granted include James Smith of Haruru, who wanted a playground in his backyard for his siblings to make up for the time they’d had to spend visiting him in hospital; and Renata Muunu-Te Tane, who wanted his family to go on a trip to Queenstown.

The six-episode series is being made by Charity TV Global for TVNZ2 and is fronted by Erin Simpson. Each episode will feature a different charity and will be filmed in a different part of the country. A screening date has yet to be confirmed.